In the cloud tops at 55 km these are the hardest working most dangerous job.  On paper it looks like they are paid well but no one shoul dhave to live like the?

They can drop depth charges against the pirates.  They have a love/hate relationship with the Company.

Faction home base (primary mine) named Cythera.  Cythera is another name for the planet Venus and also refers to an island off the coast of Greece.

Roustabouts and roughnecks are based on offshore facilities such as oil or gas rigs or drilling platforms, working as part of a team of up to 20 people.  Roustabouts undertake labouring tasks that help to maintain the drilling area. These include:

Most of the work is carried out under the supervision of a lead roustabout. Roughnecks carry out more skilled duties related to the actual drilling operation:

Most of the work is carried out under supervision of an assistant driller. See Derrickman/Driller (Oil and Gas) for further details.

Oil drilling rigs are small, mobile structures; production platforms are larger, accommodating 50 to 100 workers, where facilities include cabins, canteens, recreational facilities and offices. Alcohol and smoking are banned. Working on a rig or platform can be physically demanding, working in all types of weather, often very cold, and at heights.

To be a roustabout or roughneck you should:

Roustabouts who show ability can become roughnecks after about six months. Further promotion is to derrickman/woman, assistant driller and driller. It is possible to become a driller within about five years. 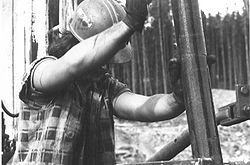 In oil fields, a roughneck's duties can include anything involved with connecting pipe down the well bore, as well as general work around a rig. The crew of a land-based oil rig can be further divided into several positions: